Acne is acne is acne, right? Well, sort of. It turns out that where your face acne is popping up may be especially important to treating it, because that’s one of your biggest clues as to what’s really causing it.

Regardless of where it shows up, acne is the result of pores getting clogged with an excess of oil, dirt, and dead skin. That clog becomes a comedone (more commonly known as blackheads and whiteheads). If bacteria gets into the mix, the comedone can become inflamed and become a papule (a reddish pimple) or a pustule (papules that are filled with pus and look “poppable”). And then there are the most severe forms of acne, nodular and cystic pimples, which form below the surface of the skin and are more likely to leave scars.

But there are also plenty of environmental, behavioral, and internal factors that can make you more prone to breakouts in specific regions of your face. Here, we’ll take a closer look at the major areas where face acne shows up—and what might be causing it.

Forehead acne is common in basically anyone with oily skin, Mara C. Weinstein Velez, M.D.,
dermatologist at the University of Rochester Medical Center, tells SELF. But your hairstyle can also exacerbate the issue. In particular, Dr. Weinstein says she’s seen patients who feel self-conscious about their skin in this area and get bangs to cover it up. But that only makes matters worse, since bangs will trap dirt, oil, and hair products in the area.

Forehead breakouts can also be caused by yeast that falls from the scalp and gets trapped in the pores along the hairline when excess sweat and oil accumulate in that area. This type of fungal acne (which technically isn’t acne) probably won’t be inflamed, Dr. Weinstein says, but will make the skin on your forehead feel “bumpy and rough” instead.

Fungal acne is best treated with a sulfur-based wash known as sodium sulfacetamide, which is available with a prescription, Dr. Weinstein says. And, as SELF explained previously, some people have also had success treating fungal acne with drugstore dandruff shampoo, thanks to active ingredients like selenium sulfide.

To prevent forehead breakouts of any variety, try avoiding heavy hair products like pomades or styling creams, and keeping your hats clean (especially if you wear them during workouts), Katherine Baquerizo Nole, M.D., assistant professor of dermatology at the University of Cincinnati, tells SELF.

Nose breakouts tend to be on the smaller side and non-inflamed. “Big cystic lesions aren’t common on the nose,” Dr. Weinstein explains. “It’s mainly blackheads, [which] are more common in patients who have super-oily skin.” And again, she says oily skin tends to be the culprit here. There are more sebaceous glands around the nose than on other parts of the face, which makes it an especially oily place on anyone—especially those who already have oily skin at baseline.

The real trick to treating nose acne is to resist the urge to pick or squeeze your blackheads. The more you mess with the pores on your nose, the more likely they are to dilate, accumulate even more oil, dead skin, and bacteria, and get inflamed. Instead, it’s better to use gentle chemical exfoliation (look for ingredients like salicylic acid, lactic acid, or glycolic acid) to gradually and gently unclog the pores.

If those aren’t helpful, Dr. Weinstein recommends using a retinoid or seeing your derm for a chemical peel to reduce the appearance of breakouts on your nose.

And for those who wear glasses, make sure your specs aren’t too tight or resting too heavily on the bridge of your nose. As SELF previously reported, unnecessary pressure can keep your dead skin from shedding normally and wind up trapped in your pores, leading to—you guessed it—acne 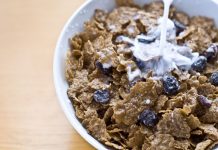 What Is the Bulgarian Bag? All About Halle Berry’s New Favorite Strength Training Tool