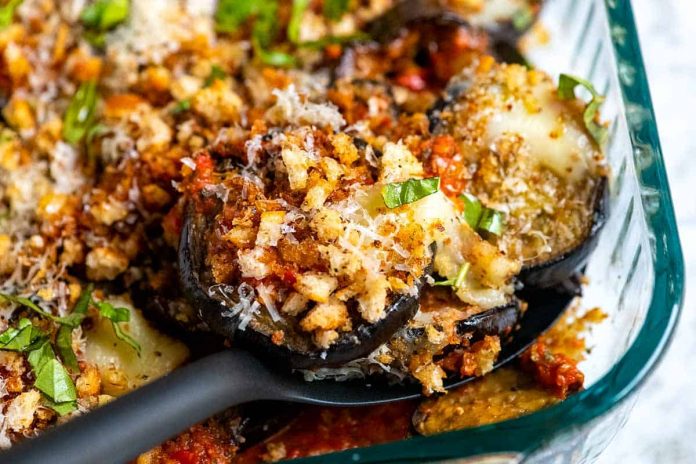 Despite its perplexing name, eggplant is an amazing food to cook with. There’s a truly impressive array of tasty and healthy eggplant recipes in the world, just waiting to be made and enjoyed by you.

“Eggplant is much more versatile than many people realize,” Rachael Hartley, R.D., certified intuitive eating counselor and owner of Rachael Hartley Nutrition, tells SELF. The type of taste, texture, and yumminess you get really depends on how you like to prepare your eggplant.

For instance, “When roasted or broiled with plenty of olive oil, eggplant gets a tender and buttery texture I just love,” Hartley says—great for mashing into a sauce or pureeing into a dip. And while eggplant can act as a mild-flavored sponge for other flavors (much like zucchini), Hartley finds that eggplant is also a particularly satisfying ingredient in vegetarian meals given the meaty, smokey taste it can take on while cooking—especially when enhanced with umami-rich ingredients (like miso) and caramelized or charred.

As for what makes an eggplant recipe “healthy”? Given that you’re starting with a fiber and vitamin-stuffed veggie, most anything you make with eggplant provides some great nutrition. If you’re going to build a full, satisfying meal around eggplant—as opposed to a side or appetizer—then it’s a great idea to include a form of protein, fat, and starch, Hartley explains. (Most of the recipes below will make for a well-rounded meal, but there are a few sides too.)

One easy way to work in that variety of food groups is a casserole-style dish. Hartley likes taking advantage of the fact that eggplants are great little vehicles and stuffing them full of grains (couscous is her fave), lentils, beans, cheese, nuts, meat, or more veggies.

The Three Equations for a Happy Life, Even During a Pandemic

A Visual Guide to a Heart Attack

Ways To Help Your Community During The Coronavirus Outbreak