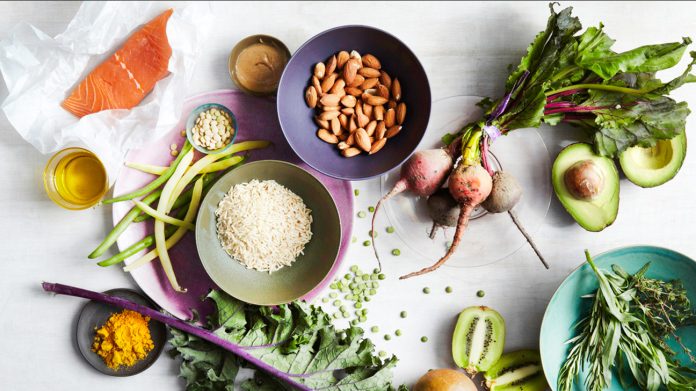 Eggs are pretty much synonymous with protein in the average American diet. Considering how much protein there actually is in an egg—six grams in one large egg and seven in an extra large, per the USDA—it’s understandable that we rely so heavily on the affordable, versatile chicken egg to get our protein. In 2018 the U.S. produced a staggering 279 table eggs per person, according to the United States Department of Agriculture (USDA).

But say you’re not an egg person—or you’re eating vegan, or you’re an egg-eater who’s just looking to diversify their protein intake. Well, there are actually tons of richer sources of the vital macronutrient out there, including familiar animal proteins like meat, dairy, and seafood as well as various plant proteins like beans and legumes. Here are 10 foods that outdo the protein in eggs.

Adzuki beans may not be as popular as their cousins—garbanzo beans, kidney beans, cannellini beans—but they do have a tiny bit of an edge on most when it comes to protein content. Of course, they’re also absurdly high in fiber, at eight grams a serving.

Ah, salmon. With its gorgeous pink hue, luscious texture, distinctive taste, and ease of cooking, salmon is one of the most beloved kinds of fish for good reason. Salmon is also a fantastic way to incorporate protein and those omega-3 fatty acids you’re always being told to eat more of.

This thick, creamy drink is packed with protein, probiotics, and tangy flavor. Somewhere between milk and yogurt, kefir works well in smoothies and can also be used in a surprising number of cooking and baking recipes, from chicken to pancakes. Or buy a fruit-flavored variety to enjoy a cup on its own.

Although pumpkin seeds are considered a fat (given they contain 14 grams per serving), they are also extremely high in protein. The iron-rich seeds are wonderful raw or roasted. Have a handful as a snack, mix some into trail mix, or sprinkle a few over soup or salad for some nutritious crunch.

Soy in its whole, natural form is bright green, slightly crunchy, and darn delicious. Sprinkle whole pods with sea salt for an appetizer, buy freeze-dried edamame for a snack to munch on at work, or add pre-shelled frozen edamame to a stir-fry or pasta salad.

Aside from having a really fun name, quark is awesome for several reasons. Technically a fresh cheese, it’s functionally like a German version of Greek yogurt. You can eat it by the spoonful with yummy toppings, throw it in a smoothie, or use it in place of sour cream or cream cheese.

Canned tuna is wildly underrated all around. Not only does it have piles of protein, it’s also inexpensive, shelf-stable, and rich in omega-3 fatty acids. You can’t go wrong with a classic tuna-salad sandwich. But, of course, if you’re a fancy tuna kind of person, tuna steaks and sashimi are great choices too.

Tempeh is a lot like tofu when it comes to its versatility and high flavor absorbency. The difference is that tempeh is considerably higher in protein, plus it’s firmer and has a nuttier flavor. It’s traditionally made from fermented soybeans, often with the addition of a grain or seed like rice, millet, or flax seed.

While peanut butter is more known for its fat content (16 grams per serving), it also has an impressive amount of protein (plus a bit of fiber, at 3 grams per serving). Creamy or crunchy, it’s a great way to get protein in with a sweeter snack, like a PB&J or an apple and PB.

Regardless of which came first in the metaphysical sense, chickens definitely come before their own eggs in terms of protein content. The weeknight dinner staple is also filling, affordable, freezable, and infinitely versatile. To get a little more fat alongside your protein here, eat it with the skin on or go for thighs.

Some Notable Reasons why you feel tired always!