I’m going to go out on a limb and say that if you only ever purchase one piece of exercise equipment in your life, it should be a pack of resistance bands. I’m talking specifically about the looped ones known as mini bands. I believe in their powers wholeheartedly. I have a set at home and I keep a set at my desk. I take them with me every single time I travel, whether by car, plane, or train. They’re that good.

Yes, dumbbells, kettlebells, and other various free weights are great workout tools, and if you’re strategic, you can build a little home gym with them. But mini resistance bands take up practically no space and weigh next to nothing. You can literally sleep with them under your pillow (I don’t do this, just saying, hypothetically) and carry them with you wherever you go.

The best part about mini resistance bands? You can use them to work every single part of your body (seriously) and one pack contains enough resistance options to adjust your workouts according to your goals—all without lifting any actual weights. What could be more convenient?

The biggest difference, though, is that resistance bands do not rely on gravity the way that free weights do, Dan Giordano, C.S.C.S., D.P.T., cofounder of Bespoke Treatments Physical Therapy in New York City and Seattle, tells SELF. Instead, you’re working against the force of just the band. That might sound easier, but what it means is that you’re working against resistance throughout the entire range of an exercise, not just during the portion where you’re moving against gravity.

For example, if you are doing a squat with a mini band around your quads, you have to press your legs against the band even when you’re standing in the starting position. You have to then press out when you’re lowering into a squat, and again when you’re standing back up, to keep your knees in line (not collapsing in toward each other). Because of this, your muscles are often under tension for an extended period of time when bands are involved, which means they’re pretty much constantly working. If you’ve ever done glute bridges or lateral walks with a mini band looped around your legs, you know that the burning sensation sets in almost immediately—that’s because you’re never really giving your muscles a solid break until you actually stop doing the exercise.

There are a ton of easy ways to use mini bands.

First, they’re great for warm-ups before a workout, and especially for activating your hips before a run. A lot of mini band exercises make it easy to target your glute medius, a small hip abductor muscle on the outer side of each butt cheek. Its main job is to stabilize both the hip and the thigh as your leg rotates with every forward step. If you’re a runner, it’s crucial to keep this muscle strong so that your legs are properly stabilized and can move efficiently. If you lack strength or stability in the hip area, a bunch of things can get thrown off—you may start to compensate with other muscles, or end up with an overuse injury like runner’s knee.

You can also use mini bands to warm up your upper body. This can be specifically beneficial for an area like the shoulder, which is notoriously unstable and can benefit from a targeted warm-up before you nail it with a heavier weight. Giordano uses mini bands every day to warm up various muscles in both his lower and upper body. “I do a lot of scapula slides to make sure my muscles are firing properly and my upper body is prepped for my workouts,” he says. “No matter what I’m doing for my workout, I do a dynamic warm-up and then I go directly into some stability work with resistance bands to get my muscles firing,” he says.

And you can even use mini bands as the main source of resistance for your workout. If you’re using mini bands for a workout (here’s a great one you can try!), it’s easy to progress—meaning, increase the resistance over time to keep challenging and strengthening your muscles—by graduating to stronger bands as the workout starts to feel easier. You can also use different bands for different muscle groups if you feel you need a slightly different level of resistance.

Also, I want to be clear that mini bands aren’t just good for runners. “Weightlifters, and anyone that’s training at all, really, can benefit from using them,” Giordano says. “The stronger you are in your stability muscles in the scapula, glutes, and hips, the better you can prevent injury.” 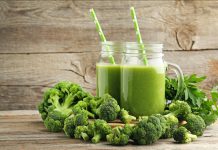 Benefits of CBD in Coffee

7 Foods That Always Cost Less Than 40 Cents Per Serving

8 Foods that boost blood cells in your Body!

Work Your Entire Core With This Stability Ball Exercise From Celebrity...