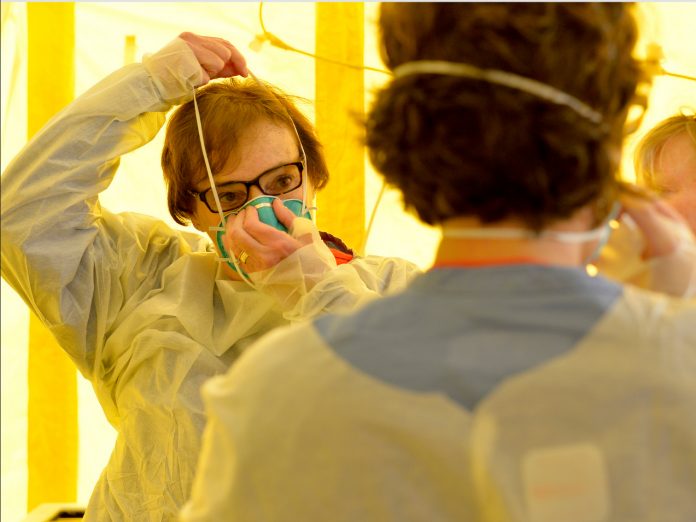 A majority of people with COVID-19 are expected to have relatively “mild” symptoms that resolve at home.

While around 80 percentTrusted Source of COVID-19 cases are mild, even this mild infection can be a problem.

Before you even know you have an infection, odds are you’ve spread the virus to three other people. If they’re 70 or older, there’s about an 8 percentTrusted Source chance they’ll die.

“I’ve gone to work sicker than that. I’m sure you have, too,” said Cassie Garret, whose wife, Celeste Morrison, recently recovered from COVID-19.

Her description of the virus is what makes it all the more deadly: Even before people develop serious symptoms, they can spread the disease.

And even for mild cases, COVID-19 can take a serious toll.

Morrison, a 37-year-old web developer who lives 60 miles north of Seattle, started to feel run down the evening of Monday, March 2.

First came the cough and extreme fatigue. Then her temperature rose to 99.7°F (37.6°C). Nothing too worrisome, so she decided to just work from home for a few days.

Garret recalls Morrison saying her lungs started to “feel weird” a few days later. “I told her that, per literally everything I was reading, she should only go to the doctor if it was really serious,” Garret told Healthline.

But later that week, Morrison’s lips, fingers, and toes were tinged blue. They headed to the local emergency room.

Morrison tested negative for the flu, but her X-rays pointed to pneumonia. A nurse said they’d run a COVID-19 test, the results of which would be available in 24 to 48 hours.

She felt ill and had fatigue and a fever. Her symptoms worsened. She still hadn’t received her coronavirus test results, so she visited a local clinic doing drive-thru COVID-19 testing on people with respiratory symptoms.

The clinic looked at Morrison’s medical records and found the ER never ordered the COVID-19 test. They swabbed her nose, and 2 days later the test results came back: She had COVID-19.

Morrison quarantined herself in the bedroom and slept through most days. The virus completely wiped her out, zapping away her energy for 12 days.

Garret knew her wife would be OK; she’s young and otherwise healthy. It was the rest of America she worried about.

“I am terrified of the way this is progressing in her, for the rest of the country,” Garret said. “Everyone goes to work when they feel gross and have a slightly elevated temperature.”

Feeling a ‘little run down’

Elizabeth Schneider, 37, went to a house party in late February. A few days later she woke up feeling a bit run down.

She went to work anyway, figuring she just needed to take it easy and go to bed early that night. Halfway through the day, though, she started feeling feverish and went home to nap.

“The fever was quite high, I was pretty surprised about that. Normally when you get a cold, maybe you get a 100-degree fever or something like that, but a 103-degree fever is pretty serious,” she said.

Schneider took some over-the-counter pain medications and went to bed early. The next day, her temperature was back down to 101°F (38°C).

She soon got word that a dozen other people from the house party also felt sick.

Many of them had gone to a hospital and tested negative for the flu. Frustrated they weren’t also tested for COVID-19, the group decided to do at-home nasal swab COVID-19 test kits through University of Washington’s Seattle Flu Study.

Seven people tested positive, including Schneider. But by the time they received the results a week later, mostly everyone had already recovered, and there was no longer a need to self-isolate.

“This whole time I thought I had just contracted the flu,” Schneider said. On a scale of 1 to 10, she rates the illness at 6.5.

She was most struck by how depleted she felt and how long the illness lasted, which for her was 11 days. “I was so tired, I just wanted to sleep,” Schneider said. “It definitely knocked me out.”

Like Schneider and Morrison, the vast majority of people who get COVID-19 are going to have more moderate symptoms; some won’t have any symptoms at all.

But they can easily transmit the virus to people who will develop a much more severe illness, need to be hospitalized, and potentially die.

“If you’re young and you’re healthy and you have no underlying health conditions, like me, you most likely will be in the majority that has mild to moderate symptoms and will recover on your own without the aid of any medication or hospitalization, ” Schneider said. “But please be cognizant of the fact there are people who are going to contract more serious forms of this.”

Because we’ve never seen this virus before, there’s no immunity in the population like we have with the flu, according to Murphy. It can spread readily from person to person, more quickly than other respiratory infections like the flu.

How someone’s body reacts to the virus comes down to what Murphy calls the “host-pathogen interaction”: You have the pathogen (in this case the new coronavirus), and then you have the host, or how an individual’s immune system gears up and responds.

We need to get used to social distancing, Murphy says, as it’s currently our best bet at blunting the spread of the disease.

If we don’t continue to adhere to strict social distancing, the “cat’s out of the bag,” Murphy said, and the virus will rip through the country.

Until we have enough immunity in the population to stop the virus from spreading, Murphy suspects “things are going to get worse before they get better.”

All You need to know about Kettlebell Training

Tips on How to Keep Your House Clean With Pets at...