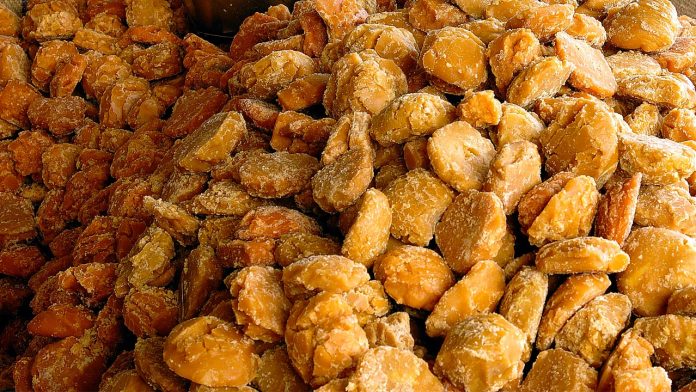 Elders often end their meals with Jaggery. One might assume that its sweet, heavenly taste is what makes it popular. However, this naturally sweetening food has enormous health benefits. Primarily it is made by boiling the raw, concentrated sugarcane juice until it solidifies, it is essentially a type of unrefined sugar. Also called as Gur, it can be made from date palm (Nolen Gur of West Bengal) or the sap of coconut too. Jaggery is a major part of one’s staple diet in most parts of India. It is called as ‘bella’ in Kannada, ‘Vellam’ in Tamil and ‘Gul’ in Marathi.

There are plenty of natural and artificial sweetening agents available on the market, with good old white sugar right at the top. However, most of them are just plain sweeteners. The benefit of jaggery is that it is a colorful, tasty, and healthy sweetener. Taste plain sugar and jaggery one after another, and it will be very clear to you. Don’t limit yourself to the sugarcane flavor; go ahead and taste the date palm, palmyra jaggery or any of the other flavors available.

Studies show and doctors advise that a sudden rise in sugar or energy level can be a major threat to the internal organs. This sudden uplift can cause severe damage to kidneys and eyes, raise blood pressure and create a number of problems in related organ systems. Jaggery is a more complex form of carbohydrate than plain sugar. This can provide its eaters with warmth and energy without harming their internal organs.

Unlike sugar, jaggery is rich in minerals, mainly iron but it also has traces of other mineral salts. While most of the iron comes through its processing in iron vessels, the other minerals come directly from the sugar cane juice, since the juice does not undergo refinement or bleaching of any kind. Therefore, jaggery is a very good source of minerals for the body. In an article published for The Medscape Journal of Medicine, jaggery was recommended as an alternative to iron supplements for pregnant women, especially for those with iron deficiency.

Jaggery pulls out dust and unwanted particles from the body, while also giving relief from constipation, due to the presence of fiber in it. As it reduces constipation and stimulates bowel movements, it further cleanses the body of toxins.

In India, it is recommended to take a few grams of jaggery after a heavy meal or after eating meat because it facilitates digestion. It activates digestive enzymes and functions like acetic acid in the stomach, thus speeding up digestion and smoothening the process, ultimately reducing strain on the intestines and the digestive tract.

F)Acts as a Cleansing Agent:

You may not normally connect sweeteners and sugars with cleansing the body. But it is one of the well-proven benefits of jaggery. It effectively cleans the respiratory tracts, lungs, food pipe, stomach, and intestines.

Tips on How to Stay Healthy at the Office

Does It Make a Difference if You Get Your Protein from Plants or Animals?