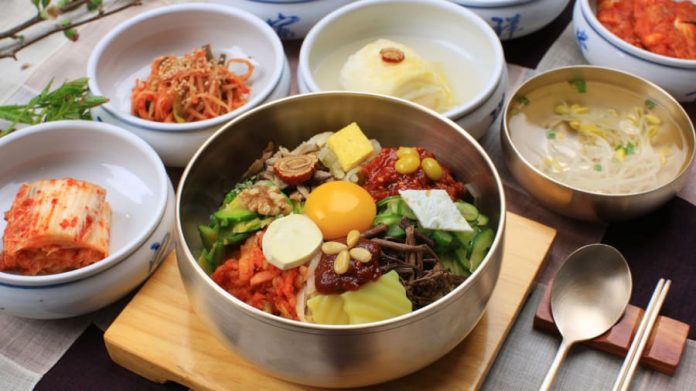 The fact that there are over 100 different types of kimchi should tell you something about the pride Koreans have in their food.
Korean cuisine has evolved over time because of cultural changes, but it remains a major aspect of the national identity.
Here are 40 dishes which are essential to the Korean heart, soul and digestive tract.

1. Hangover stew (해장국)
Given South Korea’s dedicated drinking culture, it’s not surprising that its hangover-curing culture is equally as developed, from pre-drinking drinks to post-drinking drinks to a glorious array of spicy and steamy stews and soups.
Made from a beef broth, with cabbage, bean sprouts, radish and chunks of congealed ox blood, the deeply satisfying taste does wonders to kick-start your sluggish brain in the morning.

2. Kimchi (김치)
Dating to the Silla Dynasty (around 2,000 years ago), kimchi is the beloved spicy sidekick at every Korean table. It’s made by salting and preserving fermented cabbage in a bed of pepper, garlic, ginger and scallion.
Feeling adventurous? Exchange your regular red cabbage kimchi for ggakdugi (chopped radish kimchi), a popular side at gimbap restaurants. Yeolmumul kimchi is a less spicy kimchi made with young radish stalks floating in a tangy soup.
For a selection of handmade kimchi, try online kimchi sellers Real Kimchi.

3. Soft Tofu Stew (순두부찌개)
Soft tofu, clams and an egg in spicy broth? This popular stew is a classic example of unexpected flavor combinations yielding delightful sensations.
The soft tofu — which breaks into fluffy chunks in the stew — holds the flavor of the clam and serves as a relief from the overall spiciness.
Proper sundubu-jjigae comes in a traditional earthenware pot designed to retain heat. The egg is cracked into the stew after serving, and cooks inside the bowl.

4. Samgyeopsal (삼겹살)
The best part of eating in a samgyeopsal restaurant is the atmosphere — a rollicking party punctuated by soju shots, pork strips sizzling on a grill and shouts for “one more serving, please!”
Served with lettuce, perilla leaves, sliced onions and raw garlic kimchi, it’s smudged in ssamjang (a mix of soybean paste called ‘doenjang’ and chili paste called ‘gochujang’) or salt and pepper in sesame oil.

5. Jjajangmyeon (짜장면)
Although originally a Chinese dish, Koreans have taken the noodles and created a thicker, yummier version that holds only a vague resemblance to its Chinese predecessor. (Think of New Yorkers and the wonders they’ve done with pizza.)
It would not be an understatement to say Korean diets would not be the same without this dish — most Koreans eat it at least once a week, and have their favorite jjajangmyeon delivery shop on speed dial.

6. Chimaek (치맥)
Chimaek, short for “chicken, maekju (beer)” is actually not a dish, but an institution. This glorious pairing features two surprisingly mundane foods: fried chicken and beer.
Neither half, chicken nor beer, is particularly remarkable on its own. But their popularity as a joint entity demonstrates a glorious combination devoured by millions of Koreans every weekend.

7. Instant noodles (라면)
Anyone can follow the directions on the back of the ramyeon package to boil water and sprinkle in the spice packet, but connoisseurs will add extras like canned tuna, eggs, and cheese for enhanced flavor.

8. Kimchi Stew (김치찌개)
A lesser-known fact about kimchi is its versatility as an ingredient in a whole slew of derivative dishes, which comprise a category of their own.
In kimchi-jjigae, red cabbage kimchi is chopped, sauteed in oil, and cooked with tofu, cellophane noodles, pork (sometimes tuna), and other vegetables.
Despite the stew’s debt to kimchi, you know it has come into its own when it’s served with kimchi as a side dish.

9. Army Stew (부대찌개)
This hodgepodge stew of sausages, Spam, American cheese, instant noodles, tteok, and assorted vegetables dates back to the aftermath of the Korean War.
Because meat was scarce, cooks found creative replacements in the surplus foods from the American army base stationed in Seoul, hence the stew’s name.
Although meat has since then become plentiful, a buddae jjigae without Spam is unimaginable.

10. Soy sauce crab (간장게장)
Ganjang gejang, or crab marinated in soy sauce, can be so addictive that it’s often affectionately called “rice thief,” the joke being that you keep eating more rice just so that you can have more gejang since it’s just that good.
Slightly tangy, tantalizingly bitter, pungent and cold, the taste may come as a shock for first-timers. But among South Koreans, gejang has been carving out a niche for itself as more of a centerpiece than a sideshow to other seafoods.

11. Tteokbokki (떡볶이)
This iconic red-orange street food is so popular there’s an entire part of Seoul just devoted to the steamed and sliced rice cakes (tteok), cooked with fish cakes (oden) and scallions in a sweet and spicy sauce made of chili paste.
Chefs have been known to put all sorts of things inside the sauce, from the black soybean paste to plain old ketchup. Call us masochists, but one thing is certain: the more pepper, the better.
Related content

12. Gopchang (곱창)
Gopchang refers to the small intestines from pork or cattle, which, chopped into rounded sections, can be cooked into soups, stir-fried, or grilled.
Grilled, gopchang is yet another important aspect of Korean barbecue culture. Chewy without being rubbery, it’s a bit more festive than samgyeopsal, although it’s still a staunchly earthy food.
And as most office workers in South Korea can tell you, it’s divine with soju.

13. Samgyetang (삼계탕)
Continuing along the masochistic strain, Koreans have a saying that goes, “fight heat with heat.” What that means is they love to eat boiling hot dishes on the hottest summer days.
The most representative of these is samgyetang, a thick, glutinous soup with a whole stuffed chicken floating in its boiling depths.
The cooking process tones down the ginseng’s signature bitterness and leaves an oddly appealing, aromatic flavor in its stead — a flavor that permeates an entire bird boiled down to a juicy softness.

14. Bibimbap (비빔밥)
This Korean lunch-in-a-bowl mixes together a simple salad of rice, mixed vegetables, rice, beef, and egg, with sesame oil and a dollop of chili paste for seasoning.
Although Korean kings from yesteryear would probably be shocked at how the royal dish has become so ingrained into the palate of the masses, we love how cheaply and quickly we can devour our favorite lunch.

15. Gimbap (김밥)
The process of making gimbap resembles the Italian glasswork technique of millefiori, and indeed, the finished gimbap often looks too pretty too eat.
Sauteed vegetables, ground beef, sweet pickled radish, and rice, rolled and tightly wrapped in a sheet of laver seaweed (gim), and then sliced into bite-sized circles

16. Doenjang (된장)
When people think Asian cuisine, they often think soy sauce. But soy sauce is actually a byproduct of this soybean product, a paste made from dried and fermented soybeans in a process too complicated to describe here.
This brown, textured paste is not the prettiest food in the world, and like Australian vegemite, the taste takes some getting used to. But once that taste is acquired, good luck trying to make do without it.

17. Gamjatang (감자탕)
Most gamjatang places are open 24 hours, because South Koreans tend to crave this stew in the early hours of the morning as an alternative to hangover stew.
This hearty dish features potatoes (gamja), scallions, ground perilla seed, and bits of pork cooked in a pork bone broth. The real appeal of this stew lies in the unique taste of the perilla seed, which is perhaps more important to the flavor than the meat.

18. Haemul Pajeon (해물파전)
Crunchy and filling, Korean pancake tastes best when it comes studded with shellfish, cuttlefish, and other varieties of seafood, to make haemul (seafood) pajeon.
And with its traditional companion of Korean rice wine, makgeolli, pajeon makes the perfect meal for a rainy day.

19. Jjambbong (짬뽕)
This dish is the soupier, spicier counterpart to jjajangmyeon and together they form the core of Korean Chinese home delivery cuisine.
But although noodles dominate in terms of sheer quantity, the onions and chili oil that flavor the soup are what really demand your attention. With copious amounts of chili oil-saturated onions and other vegetables on top of the noodles, few are able to finish this dish in its entirety, but many try.

20. Sundae (순대)
Another street food, sundae is a type of sausage, similar in content to blood pudding, with roots in Mongolian cuisine. “Real” sundae is pig intestine with a stuffing of cellophane noodles, vegetables, and meat, but even if you eat the street vendor version, which uses a synthetic replacement for the pig intestine, you will still be able to enjoy the lungs and liver on the side. Yum.

21. Kongguksu (콩국수)
This seasonal dish might taste bland to some, but once you learn to enjoy the subtle flavor of the bean, you will acquire a taste for this cold, creamy, textured noodle dish that no other dish will be able to satisfy in the summer.
And if the pale, spring green julienne cucumbers placed on the hand-ground, snow-white soybean doesn’t tip you off, kongguksu is a highly nutritious dish that also happens to be vegetarian-friendly.

22. Kalguksu (칼국수)
Bad kalguksu can be very bad. But good kalguksu is divine.
Although most kalguksu places will add mushrooms, sliced pumpkin, and seafood or chicken to the basic ingredients of noodles and broth, at the end of the day kalguksu is about the pleasure of the plain.

23. Ox Bone Soup (설렁탕)
This ox bone soup is easily recognizable by its milky white color and sparse ingredients. At most, seolleongtang broth will contain noodles, finely chopped scallions, and a few strips of meat.
Yet for such a frugal investment, the results are rewarding. There is nothing like a steaming bowl of seolleongtang on a cold winter day, salted and peppered to your taste, and complemented by nothing more than rice and kkakdugi kimchi.

24. Tteokguk (떡국)
Originally tteokguk was strictly eaten on the first day of the Korean New Year to signify good luck and the gaining of another year in age. The custom makes more sense if you think in Korean: idiomatically, growing a year older is expressed as “eating another year.”
But this dish of oval rice cake slices, egg, dried laver seaweed, and occasionally dumplings in a meat-based broth is now eaten all year round, regardless of age or season.

25. Doenjang jjigae (된장찌개)
This humble, instantly recognizable stew is one of Korea’s most beloved foods.
The ingredients are simple: doenjang, tofu, mushrooms, green peppers, scallions, and an anchovy or two for added flavor. Add rice and kimchi on the side and you have a meal — no other side dishes necessary.
While its distinctive piquancy might throw some off, that very taste is what keeps it on the South Korean table week after week. 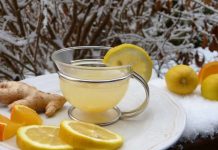 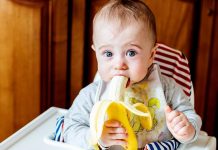 Home Remedies for Heartburn: 10 Ways to Get Rid of Acid Reflux 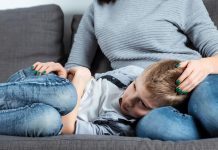 Do We Really Use Only 10 Percent of Our Brain?

The Most Iconic Food in Every State

Can Vitamin C Protect You from COVID-19?

What is a ‘community space’ and why are we so passionate...