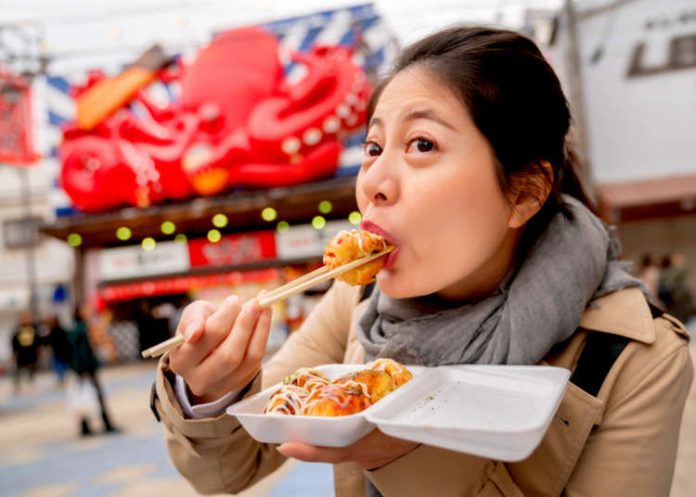 Takoyaki – commonly known in English as Japanese octopus balls – is a quintessential Japanese street food that’s found especially at summer festivals in Japan. Essentially they’re round balls of fluffy dough that are smothered with a special savory takoyaki sauce and have a tasty piece of octopus meat at the center.

Follow along as we share more about this Japanese snack, how takoyaki is made, and discover why they’re such an addictive treat!

So exactly what is takoyaki? The English translation – Japanese octopus balls – might not create the right image! Takoyaki is a round, fried food made from batter, small pieces of tender octopus and other ingredients, like green onions and ginger. They are considered a Japanese street food are popular at festivals, often prepared from food stands right in front of the prospective customers.

However, takoyaki can also be found being sold at convenience stores, food trucks, and in people’s homes as well! Though, be warned, takoyaki is usually served piping hot! So be sure to give it time to cool while you sip on a beer.

Brief history of Takoyaki
Takoyaki is said to originally be from Osaka, where, according to one theory, a street vendor called Tomekichi Endo invented this delicious octopus dish in 1935. However, it wasn’t an invention out of the blue but rather an adaption of a previous version.

Supposedly, it all started with another dish called choboyaki, the prototype of takoyaki as we know it today. Choboyaki is rather similar in ingredients, but in appearance it is more like a flat rectangle rather than individual balls.

From choboyaki evolved rajioyaki, likely named after the newest, most popular invention of the time: the radio. The characteristic ball shape was introduced with rajioyaki, and the dish was generally filled with beef. When the beef filling was replaced with octopus cuts, Japanese octopus balls – takoyaki – was born.

Ever since then, the dish has conquered the taste buds of Japan by storm. It is a staple food of Japanese festivals, sold in stalls called yatai, and can also be found in shops and restaurants all around the country. Likewise, different regional varieties of takoyaki have developed over time as the dish has migrated.

2. When do Japanese Eat Takoyaki? The Staple Food of Festivals!
Takoyaki taste amazing!
Now that we know what is takoyaki, when do Japanese eat it? Takoyaki goes with Japanese summer festivals like ketchup goes with French fries. At stalls and restaurants, takoyaki is often served in paper dishes resembling little boats. Don’t be surprised when you’re served a toothpick instead of chopsticks to eat your takoyaki with.

Spear the ball and try to eat it while taking care not to burn your mouth! There’s nothing more satisfying than to snack on freshly made takoyaki while celebrating two heavenly lovers at the Tanabata festival, after dancing the bon-odori during Obon, or while watching magnificent Japanese summer fireworks.

3. Takoyaki Recipe: Ingredients & Preparation
Takoyaki batter being poured into the mold for frying
The base of Takoyaki is minced or sliced octopus that is steamed in batter. Said batter can be freely enhanced with any sorts of ingredients, from a variety to fresh, seasonal vegetables to ginger, green onion, or tempura bits called tenkasu.

How to make takoyaki at home
Special takoyaki pans that feature half-spherical molds make the preparation of the delicious dish fairly easy: fill the molds with batter, then add octopus and other ingredients.

After about 2 minutes of cooking, turn the individual balls with a toothpick, chopstick, or specially made takoyaki turners. Cook your takoyaki for another 3 or 4 minutes, until the batter is golden brown, while constantly turning the little octopus delights.

4. Making Takoyaki at Home – Customize the Traditional Takoyaki Recipe with Sausage, Cheese, and More!
You can make takoyaki at home, too!
Takoyaki can also easily be made at home. Making takoyaki without the aforementioned takoyaki pan is rather impossible, as the batter will not stay in the characteristic ball shape. Worry not, however, as such pans are available both all over Japan and all over the internet, even outside of Japan.

As making takoyaki is merely a matter of minutes as long as the batter is readily made, it’s an extremely popular party food that, if you have a portable gas cooker, can be cooked and enjoyed right at the table!

While the classic takoyaki is of course made with octopus, this should by no means keep you from trying out all sorts of ingredients to put inside the savory batter – especially if you, your family, or your friends aren’t fans of eating octopus. Sausages, cheese, all sorts of vegetables, tofu: try whatever strikes your fancy!

The only important thing regarding takoyaki? Make sure to eat them right out of the pan, as they’re the most delicious when they’re fresh and piping hot! 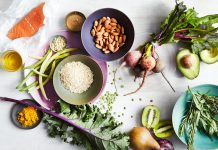 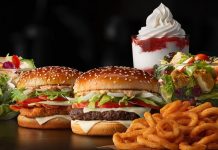 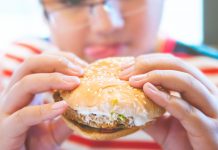 5 Natural remedies for a wart

What a Body Positivity Expert Wants You to Know About Adele’s...

‘The more vaccine projects we have, the better our chances’

Flying private is all the rage — why it’s so hard...