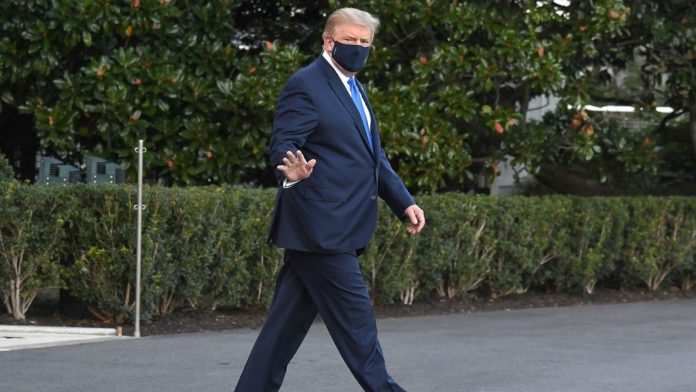 US President Donald Trump has said he will not wear a face mask despite new medical guidance advising Americans to do so.

He could not see himself greeting “presidents, prime ministers, dictators, kings, queens” in the Oval Office while wearing one, he said.

He stressed that the guidance released on Friday was “voluntary”.

The guidelines issued by the Centers for Disease Control and Prevention, the government’s public health advisory agency, came as the US reported at least 270,473 confirmed cases of Covid-19, with nearly 7,000 deaths.

Until now, US health authorities had said that only the sick, or those caring for patients of coronavirus, should wear masks, but newer studies suggest that covering up one’s face is important to prevent inadvertent transmission.

“From recent studies we know that the transmission from individuals without symptoms is playing a more significant role in the spread of the virus than previously understood,” Mr Trump said on Friday.

However, he told reporters after announcing the CDC’s new guidance: “I just don’t want to do it myself.”

“Sitting in the Oval Office… I somehow don’t see it for myself.”

Americans are now advised to use clean cloth or fabric to cover their faces whilst in public. Officials have stressed that medical masks remain in short supply, and should be left for healthcare workers.

The guidance comes as the number of cases globally climbs past one million.

You Need This Dumbbell Back Workout If You’ve Been Sitting All...

What is Sodium Lauryl Sulfate and Is it Safe to Use?

Life changes – After getting COVID-19 Vaccine

How to choose cold weather clothes?

Milder Effect of COVID on Kids than Adults: Study Says